My work focuses on understanding how we learn about and avoid danger, and how the systems supporting these abilities go awry in depression and anxiety

I am especially interested in understanding how people become disposed towards negative thought patterns (e.g., worry and rumination), a common symptom of mood and anxiety problems. 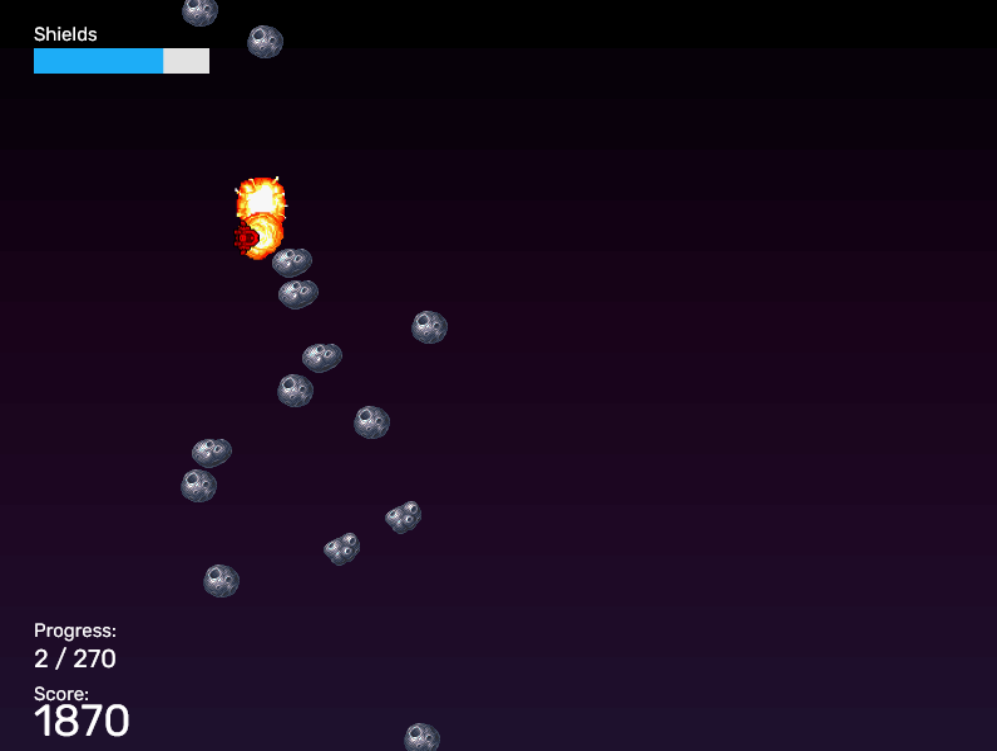 The way we learn from events that happen to us plays an important role in building our perception of the world we live in. In particular, how we learn from encounters with danger and safety has the potential to influence how likely we think good and bad things are to happen to us.

I use computational models of aversive learning (i.e. learning from danger and safety) to understand how we learn about threat, and to link these learning processes to symptoms of disorders such as depression and anxiety.

Results from these studies have shown that symptoms of psychiatric disorders such as depression and anxiety are associated with the way people learn from danger and safety. Specifically, people who report more cognitive anxiety (for example worry) and symptoms of depression tend to learn faster from danger than safety, and tend to me more uncertain about safety. 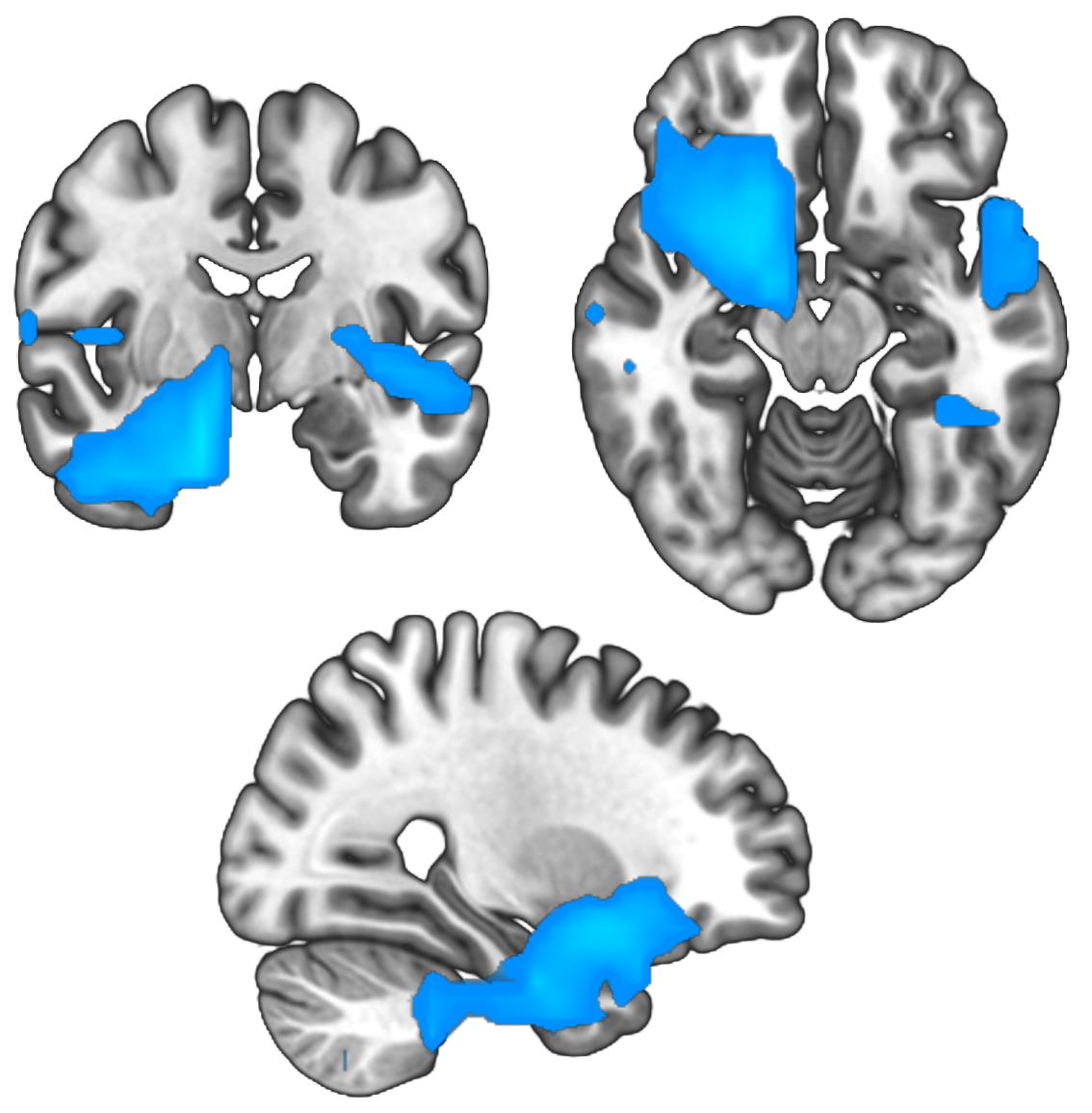 Learning through trial and error is often not feasible in the context of danger; the direct experience that is necessary for model-free learning could have deleterious consequences. As a result, model-based planning is particularly important. Model-based planning uses an internal of the world to guide decision-making, enabling flexible behaviour in the absence of direct experience.

I have shown that model-based avoidance is supported by neural reactivation of relevant task states, suggesting that the brain “simulates” the consequences of actions to guide decision-making. I have also shown that the brain uses complex planning strategies (such as tree search), which depend on an internal model of the world, to support avoidance of complex, dynamic threats. 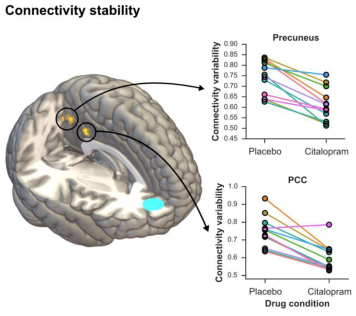 I am also interested in how symptoms relate to neural circuitry involved involved in negative affect. Negative thought patterns have been linked to altered activity, connectivity, and structure in brain regions thought to be involved in regulating mood.

I have used newly developed approaches to assessing connectivity within functional brain netwrosk to show that connectivity within the default mode network, a network associated with self-generated and self-directed thought, is less stable in people suffering from depression. It is possible that this instability might be related to rumination and a tendency to repeatedly dwell on negative thoughts.I have shown that stability in this network is improved following administration of citalopram, a commonly prescribed antidepressant drug, providing further evidence for its role in depression.

However, while these studies are informative, they do not tell us precisely how these networks might be involved in specific symptoms. In ongoing work, I am using computational modelling to identify specific processes involved in learning and decision making, with the aim of linking key functional networks to these processes.

Threat perception in the real world 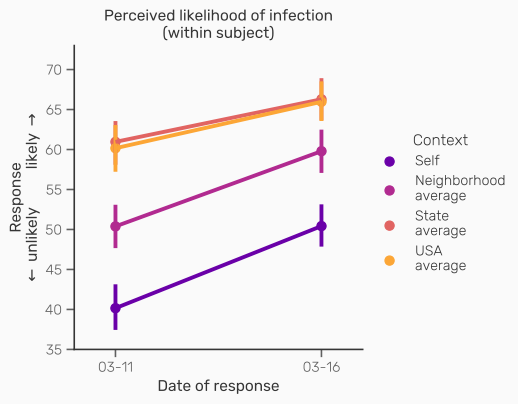 The majority of my work investigates how we build perceptions of our environment in contrained experimental tasks. However, it is important to evaluate whether the conclusions we draw from these tasks represent how people perceive the likelihood of negative and positive events in the real world. An additional focus of my work involves assessing whether people learn about threat in the real world in the same way they do in the lab.

During the recent COVID-19 pandemic, I have conducted research into how people perceive threat from this global pandemic. This allows me to explore whether the way in which people learn about threat in the real world is similar to what we see in the lab.

I am also seeking to provide more ecologically valid assessments of threat perception through the creation of experimental tasks that present more engaging, realistic scenarios to subjects. Often, we use tasks that present subjects with abstract stimuli to learn about. I am designing tasks with inspiration from video games, putting subjects into virtual environments in which they must learn to survive.